April 26, 2011
Indonesia does have a reputation for an authoritarianism, which makes it all the more refreshing to see the challenging series of sculptures that are scattered around Grand Indonesia, (probably) Jakarta's most glamorous shopping mall.

Confronting statements on life, love and labour are on display, and most veer far from the agitprop pseudo-art that acts as a substitute for creative expression in many parts of the world.

The art at Grand Indonesia is is art that forces people to confront the status quo and think for themselves, a provocative concept itself in a country that attaches such a high value to groupthink.

It is quite telling that it is not a gallery that provides a home to these sculptures, but a shopping mall.

In the West, shopping malls seem to be havens for bland inoffensiveness in which people can mentally switch off as they administer a hefty dose of retail therapy.

Most likely, the confronting art on display at Grand Indonesia would never appear in a mall in many other nations. The fear of offending someone - on the grounds of religion, wealth or merely good taste - would be too great.

Thankfully, the folks behind Grand Indonesia are a more open minded. All power to them. 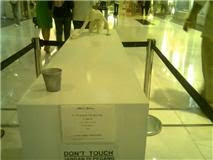 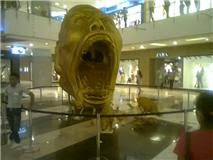 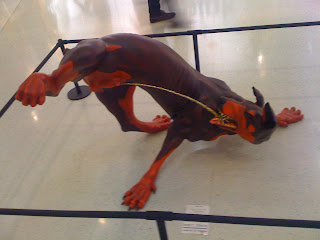 I might add some more over the next few months.
Indonesia

Mincer of Logic said…
higher resolution would be awesome.

Interesting art in a shopping mall. A little bit hard to see.

I'm sadly constrained by using the camera on my phone at this stage, but hope to have an alternative soon.
27 April 2011 at 21:12