June 20, 2011
There are few things that give you a flavour of a city more than thronging with fans at a sporting event.

And having spent an afternoon shouting myself hoarse with the Jakmania fanatics that drape themselves in orange in support of Persija Jakarta, I can confirm that the Indonesian capital is no exception.

Yesterday was their final game for the season in the Indonesia Super League of soccer (or football, to the purists), played in the imposing concrete cauldron that is Gelora Bung Karno in Senayan. The home side was taking on PSPS Pekanbaru, hailing from an utterly unremarkable city on Sumatra.

I went to the game with a small dose of trepidation given it was the side's first home fixture after a several-week ban imposed by police following a small riot outside a game in early April.

Still, emboldened by curiosity, I followed the crowd of enthusiastic young supporters who had gathered on the curb not far from my home, waiting for a bus. After wading through the inevitable macet (traffic) that fills the streets, even on a Sunday afternoon, I made it to the stadium that hosts political rallies when it's not hosting sporting contests.

This description, published a few weeks back, is rather apt:

The Bung Karno Stadium, right in the middle of the city, holds 88,000 people and is just about everything you would expect of a soulless stadium rented out for religious meets, political rallies and civil service entrance exams, built with Soviet help in the early 1960s.

So having paid my Rp 30,000 ($US3.50) to a scalper - I could find no legitimate ticket-seller from which to make a purchase - I headed into the stadium. Cautious about my own safety and not wanting to dilute the atmosphere, I headed a few bays away from the hardcore Persija fans, who are part of a slightly obsessive club that calls itself Jakmania.

Jakmania takes the tradition of choreographed singing, chanting and dancing that characterises enthusiastic soccer crowds the world over, and adds a massive gulp of red cordial. Every fan - with the exception of the handful of curious foreigners - goes along with the actions dictated by the cheerleading fan co-ordinators, who stand on a scaffold at the front of the crowd.

As with many things in Jakarta, there is a rather unrestrained quality to Persija supporters, where many of the social and legal constraints that have been imposed for decades in other parts of the world are ignored.

Supporters will unashamedly unleash the full power of an aerosol-can hooter in the ear of a fellow fan. The waft of cigarette smoke (unremarkable given Djarum are a major sponsor) is sensed near-constantly. Flares will be let off on a regular basis to celebrate a goal, a win, and even a view that an opposition player ought be given a red card. And despite a wire fence and imposing moat of several metres' width between supporters and the arena, fans will try to rush the field.

Exhausting, sure - but also a heck of a lot of fun. In the end, Persija won 3-0 to pick up third spot. I reckon they can step up a level next season. I'm certainly keen to go along to find out. 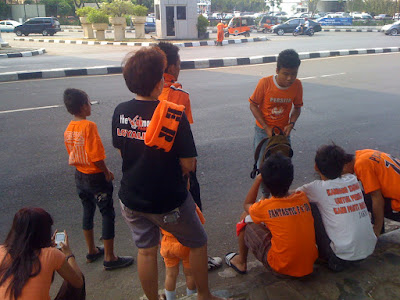 Fans waiting for a bus an hour before the game. 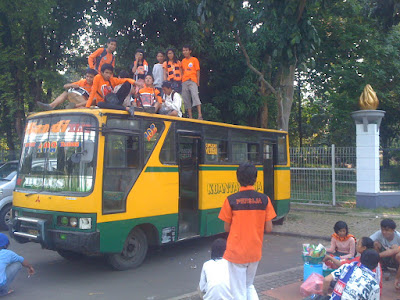 These supporters were armed with instruments, and prepared to use them. 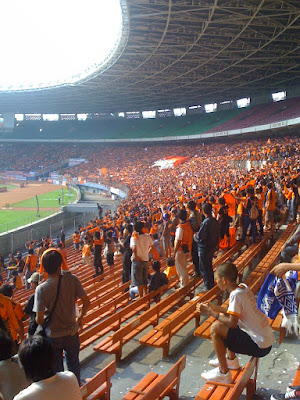 There was a vein of patriotism running through the vocal support, as the Indonesian flag attests. 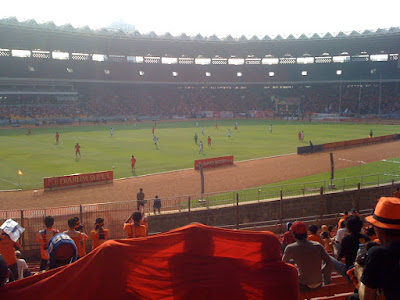 The field itself was lush and green, and the standard of soccer pretty solid. 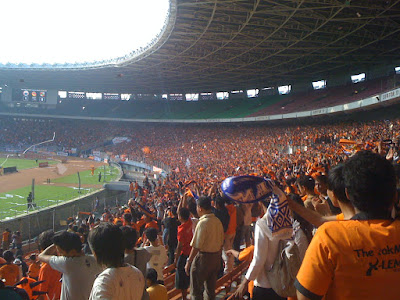 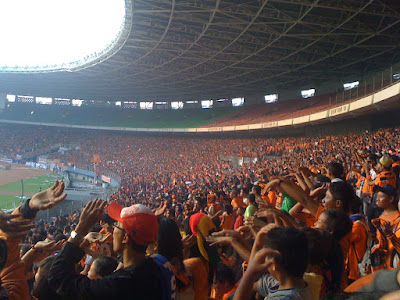 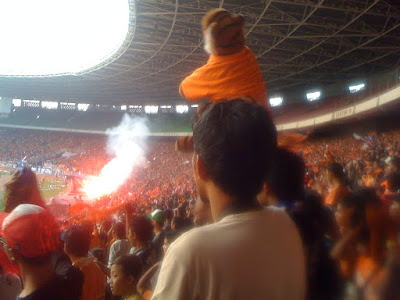 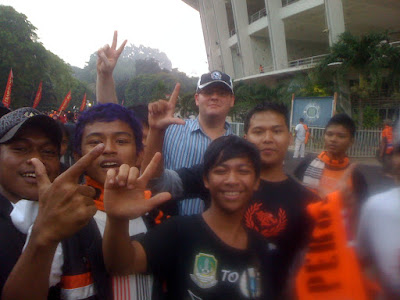 Sadly, Collingwood supporters were a little thin on the ground.
Indonesia