April 09, 2017
If you stand at the right Canberra street corner on a Wednesday or Thursday morning you might just catch me as I make my transition. That’s the transition from Goofy Hands-On Dad to Serious Salaryman that is a regular part of my morning routine as I venture the half-kilometre or so from where I drop off my 11-month-old daughter at childcare to the corporate office where I ply my trade.

The day starts pleasantly enough on these days. After the usual morning activities at home, my daughter and I jump on the suburban bus that putters down our street. I carry my daughter on board – no room for a pram on a peak-hour service, anyhow – and position her on my lap so we can both sit comfortably. No doubt to the annoyance of many of our fellow passengers I can’t help but play up each little thing that happens as I whisper in my daughter’s ear.

“We’re going around a cornerrrrrr,” I say, swaying sharply to one side far beyond anything justified by centrifugal force. “Look, there’s a man on a bike,” I whisper as a cyclist unleashes a verbal tirade at the bus that has just cut him off. “Lots of people are coming on for a ride,” I offer excitedly as a group of sleepy office workers saunter on. Before long, though, I go quiet and the two of us stare out the window.

It’s then that I realise how easy it is to attract admiration as a Goofy Hands-On Dad. People shuffle over to make room for the two of us near the front of the bus, while fellow commuters glance over and offer encouraging smiles. Some people engage my daughter in conversation, she the doll on my lap and me the ventriloquist trying not to let people see my lips move. The mere fact that I am out and about with my baby daughter and have yet to drop her in the aisle seems cause for praise. I notice it often comes from women of my parents’ generation, for whom hands-on fathering was a rarity. No doubt mums on the road with their offspring have to work much harder to attract positive attention from strangers.

Eventually we get to our stop and farewell all our well-wishers as we alight. It’s tempting to offer autographs, but I resist the urge. 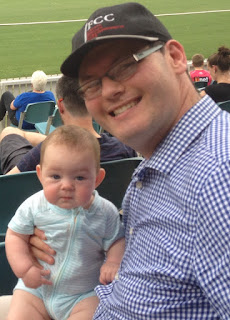 Then to childcare, where there are plenty of dads among the parenting throng. Once we get to my daughter’s room, she and I sit down on the floor and play with whatever’s nearby. Notionally this is for her benefit, but who am I kidding? It’s also for me, so I can have an oasis of peace with my little girl before I wander into whatever swirling winds the day in the office will provide. They are tender moments, and sometimes I wish they’d never end.

But after a few minutes my daughter crawls over to the other kids, or to the childcare workers who take such loving care of her, and I’m forgotten about. I offer her a farewell wave, sometimes get one in return, and then head for the exit.

It is then that I do the eight-minute stroll in which I transform to Serious Salaryman. My shoulders straighten from their forward hunch. My voice (at least in my head) moves down an octave. My mood shifts to professional realism from one of relentless positivity. I am getting ready to take on the day.

Lucy Kellaway wrote an interesting recent column about the disconnect between people’s domestic identity and their work identity, which was wonderfully illustrated by the recent Robert Kelly television interview interrupted by his kids:

“Most of us wear masks in the office most of the time. Work requires a code of behaviour that must be followed. It involves being in control, while a couple of toddlers on the rampage involves just the reverse. Being at work means claiming to be ‘passionate’ about things we have to believe matter, while the presence of a toddler makes sustaining that pretence hard – serious things suddenly look laughable.”

I think Kellaway is right, but there is more to it. Some people’s professional persona allows them to be playful enough that the transition from home to work is not a sharp one. Other people – and I put myself in this category – assume a more corporate air in the workplace, and so find the transition jarring.

There has rightly been lots of discussion over the past decade about how to make workplaces friendlier to women who are returning to work after having a child, whether it’s through flexible hours, job-sharing arrangements or merely more understanding about absences from the office to meet caring obligations.

But, surprise surprise, blokes get plenty of benefit from these things as well, especially new dads. If we want dads to take on more of the caring responsibility for their kids (as this GHOD certainly does) then we need to give them the social permission to take up the parental concessions that generations of women have fought so hard for.

The issue is not one of law but one of culture. By law employees of 12 months standing have a legal right to request flexible working arrangements, which an employer must “seriously consider”, although can refuse on “reasonable business grounds”. Such an entitlement is available to both mothers and fathers. But while women who make use of this flexibility are following social norms, men who do so are at risk of having their commitment to work questioned.

There has been plenty of reporting on the phenomena of women who cut back on work commitments to fulfil parenting responsibilities as being on the “mommy (mummy?) track” and having limited career prospects. What does it mean for men who seek to cut back at work? Do they also face stigma for their priorities?

The stakes are higher for people who are the primary breadwinners for their family. Putting career advancement at risk when you are earning not just for yourself but for your partner and children can be a dangerous move. Those people are more likely to be sensitive to any negative repercussions from pushing back at work, and so are less likely to do so. It’s no wonder some dads feel in a quandary.

There are signs of progress. I was fortunate to take four weeks of parental leave after the birth of our daughter, with the support of my employer. Via Centrelink, I was entitled to two weeks’ pay at minimum wage. The benefits of paternity leave were spelled out in an interesting UN report a few years back on the State of the World’s Fathers:

“The introduction of a father’s leave quota (‘daddy days’) in Norway in 1993 created a structure that enabled a more equitable division of unpaid care work and household tasks; it also brought about positive changes in individual attitudes toward state support of childcare that persist today. In the United Kingdom, fathers who took leave after birth were 19 percent more likely to participate in feedings and to get up with the baby at night eight to 12 months later, as compared to fathers who did not take leave. In Quebec, a study conducted several years after the reforms in 2006, which led to a huge increase in fathers taking leave, showed that ‘fathers exposed to daddy quotas spent more time doing housework, while mothers spent less time carrying out such tasks and more time on childcare and paid work.’“

Some employers are more accommodating than others. I know of one dad in the public service who has taken a year off to look after each of his two children, and had a supportive boss who allowed him to slot back in afterwards. Not everyone is as lucky.

In Australia, at least, the need to change goes beyond parental leave at the time of the birth (important though that is) towards flexibility in the years that follow.

So while the older ladies on the bus might look approvingly at a dad whispering nonsense into his baby’s ear, there are other people who are not quite as encouraging.
dad

sathya said…
A very nice guide. I will definitely follow these tips. Thank you for sharing such detailed article. I am learning a lot from you.

Base SAS Training in Chennai

Unknown said…
Wow amazing i saw the article with execution models you had posted. It was such informative. Really its a wonderful article. Thank you for sharing and please keep update like this type of article because i want to learn more relevant to this topic.

Mincer of Logic said…
Hey Ari
I can say with no trepidation there is a significant quandary for this breadwinner. That said, I keep telling people at work if they pay me 20% more, I'll work 20% less and be 20% happier. Perhaps one day :)
- Skip