Showing posts from January, 2012
Show All

January 22, 2012
The plight of atheists in Indonesia has been attracting a bit of attention lately, with the sad case of the man facing five years in prison for doubting the existence of god in a Facebook post coming on the heels of this interesting profile on an atheist activist in the Jakarta Globe. While Indonesia often prides itself on its religious tolerance, that tolerance is not readily extended to adherents of faiths or non-faiths beyond the six religions recognised in the Constitution (Islam, Protestantism, Catholicism, Buddhism, Hinduism and Confucianism). And frankly, often adherents of those six have their rights violated, such as in the case of the East Java Shiites or the GKI Yasmin church congregation in Bogor. Early on in my time in Indonesia, it was explained to me that Indonesians have a rather distrusting attitude to atheism. Many associate it with communism, which was demonised by Suharto after he ousted leftist Sukarno in 1965. That may be part of it, but I think the expl
4 comments
Read more 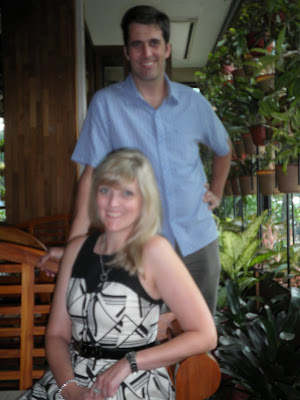 A story of mine on Jeremy Stringer and Adelle Neary, the Australian diplomats making a name for themselves in Indonesia on TV talent show Asing Star, is in The Age today, and is available online here . For those interested, here's the full version of the story I wrote, and a picture and a couple of video clips to go with it. By Ari Sharp Jakarta When Adelle Neary and Jeremy Stringer came to Jakarta to represent the Australian government, they were both keen to strengthen the ties between Indonesia and its southern neighbour. What they didn’t expect was to become celebrities in the process. Neary, a 29-year-old from Adelaide, and Stringer, a 41-year-old from Fremantle, are the singing diplomats who have taken center stage in the television program Asing Star, and Australian Idol-type show that invites foreigners to sing Indonesian songs. “What’s great about Indonesia is that they just like to see people up there having a go,” Stringer said in an interview at an upscal
Post a Comment
Read more

The perils of being overly adaptive

January 13, 2012
Following on from my post last week about prolonged sensory overload being the explanation for many of the behaviors you see in Jakarta, I read an interesting piece in the Jakarta Globe (my employer) by Farid Harianto providing a similar explanation, although in slightly different terms: Carol Graham of the Brookings Institute makes a powerful argument that a human’s ability to adapt to inhospitable conditions is a good thing for his or her psychological perspective but at the same time facilitates collective tolerance that leads to bad equilibrium. Humans can adapt to almost anything from poverty, unemployment, bad health, and high levels of crime and corruption. Adaptation is a very good thing, a human defense mechanism under unfavorable conditions. The danger arises when this adaptability leads to surrender. Rather than attempting to change an all but intolerable condition, people collectively assume, and expect, that such a condition is merely a constraint that they have to
Post a Comment
Read more

January 11, 2012
Yesterday, I was among a group of Australian journalists participating in a briefing with visiting Foreign Minister Kevin Rudd on his visit to Jakarta. I had a piece published in the Australian Financial Review on the discussion (page eight today, behind a pay wall online), but due to space limitations, there was no room for some of the content. Here's the full version I wrote. By Ari Sharp Jakarta The Australian corporate sector risks missing out opportunities in Indonesia as it moves toward its long-term place among one of the 10 largest economies in the world, Foreign Minister Kevin Rudd said on a visit to Jakarta. Mr Rudd, speaking after meeting with the country’s new trade minister, Gita Wirjawan, urged large Australian companies to conduct one board meeting a year in Indonesia so that members could witness the growth in the world’s fourth most populous nation. The Australian minister praised a trio of significant economic reforms that he said was part of “Indone
Post a Comment
Read more

January 03, 2012
You don’t need to be in Jakarta for long to experience sensory overload. Take the near-deafening noise that acts as the soundtrack to the city. Wander through the streets of Jakarta, and it’s not uncommon to hear people shouting in conversation despite being within a metre or two of one another. Many older vehicles have long discarded their mufflers, and trundle along the street inducing headaches in anyone unfortunate enough to be within earshot. Head to a cinema, and the soundtrack is pumped out at a significantly louder volume than theatres in other parts of the world. Or consider the street food that constitutes the diet of many Indonesians. A popular snack stand is simply labelled gorengan, which translates as fried. On offer are half-a-dozen different things – tofu, tempeh, banana, cassava and more – battered and deep-fried in cheap oil to the point where the ingredient at the core of the greasy delight is sometimes hard to locate. An essential condiment to gorengan is whole
1 comment
Read more
More posts