Showing posts from July, 2017
Show All

Like the perfect alignment of the planets, a few weeks back our three leading political parties were all simultaneously fighting – not each other, but themselves. Most prominently, the Liberal Party was fighting an undeclared civil war, with Tony Abbott launching grenades from the backbench as Malcolm Turnbull sought to exhume the corpse of Robert Menzies for use as a human shield. Then in the Labor Party Anthony Albanese was showing a bit of leg to differentiate himself from the prim buttoned-up Bill Shorten. And the Greens were struggling to work out if they were the party of the middle-class doctor from Melbourne or the socialist warhorse from Sydney. On the surface these tensions appear to reflect the individual circumstances of each party, and the Machiavellian struggle to achieve and sustain leadership within them. But there’s also a unifying theme that sits at the heart of our political debate: pragmatism versus ideology. Let’s look at the tensions through th
25 comments
Read more 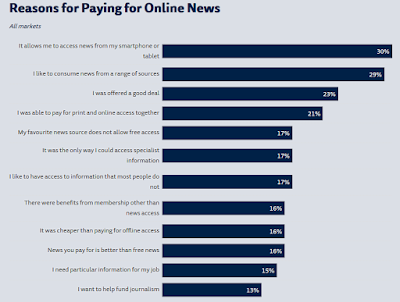 It’s a dire time for the news industry. Readers are flooding to social media for content, advertisers are moving with them and costs are being cut at a brutal rate in a desperate bid to meet falling revenue. It is increasingly clear that business models that depend on amassing large audiences in order to provide a forum for advertising will always struggle against the “niche of one” audience that social media platforms can provide for advertisers. There’s been lots of talk lately about ways to fund public interest journalism. One idea is to tax the online aggregators – Facebook and Google, primarily – that sell advertising against the news content of others to support news organisations. Another is to make news subscriptions or donations to its producers tax deductible.  Both ideas are worth considering, but they do not abrogate the need for news organisations to seek better ways to draw revenue from consumers.  (It is alarming that discussion of efforts to build a
18 comments
Read more
More posts