Out the other side

“Well,” said my haematologist, leaning back in his chair thoughtfully, “yes, I guess so.”

Exhale. And so it was that I found out I had beaten cancer, with a whimper rather than a bang.

It was a suitable bookend to my experience in October, when I found out my body was afflicted with this wretched disease with a rather underwhelming encounter with a distracted doctor.

It had been about six months since I’d felt the effects of the lymphoma, and three months since the last of the chemotherapy washed through my body. I knew there was a fair chance I was in the clear, but it’s very comforting when that observation is made by a medical professional with a PET scan of my body at his fingertips.

As the doctor explained, it doesn’t mean that the mass in my upper chest has disappeared entirely, but that the tumour that does remain is small and innocuous. Those cells may never disappear from my body entirely. A further PET scan later this year was recommended to check whether the tumour was continuing to shrink.

The daily grind of the chemotherapy treatment already feels like a distant memory. When I was in the midst of it I had an intimate knowledge of each of the drugs in my cocktail, living my life by a drug treatment cycle and feeling the aches and fatigue of each of their side effects. Now that it is not a part of my life that information has slipped from my mind, the specifics of each step a distant memory.

Part of the reason why is practical; if I don’t need that information to influence my actions, why bother retaining it? But part of it is also a coping mechanism. Forgetting the detail allows me to better close that slightly terrifying chapter of my story. Were those details to remain in my mind I fear I would become what I wanted to avoid – a person who defines himself by his disease.

I know I’m one of the lucky ones. For now at least, my treatment has been limited to the poisonous elixir of chemotherapy. Others in my position have endured my course of treatment only to be told that danger still lurks within them and they need to undergo radiotherapy. Even as their body reeled from the chemical assault they would need to ready themselves for more. The physical challenge would be tough, but the angst that went with it would be a test of endurance.

Of course there’s some chance I’ll be back for more treatment down the track. Being in remission means that the immediate threat has passed but there’s a real prospect that the cancer starts to grow again and I’ll need to take action. For the next five years, and in reality for the rest of my life, I will need to be vigilant for the symptoms of the dragon within me again breathing fire, like night sweats or fluctuations in weight.

There’s also the sad irony that the battery of diagnostic tests I’ve had along the way – PET scans, CT scans and x-rays – each carry their own risk of bringing on, you guessed it, cancer. So I could conceivably get a cancer resulting from the tests I needed to track my previous cancer.

Being a cancer survivor also carries its own psychological burden. As my former colleague and fellow cancer survivor Michael Coulter has written, life can be tough even once you’re out the other side:

In the end, I was among the lucky. The chemo did its job, the side effects receded, and a year later I am much as I was, barring an aversion to ice-cream and a certain nervousness about unexplained aches and pains.

It’s taken all of those 12 months, though, to reach a point where having had cancer isn’t the first thing I think about when I wake up. Because the disease’s final surprise is that even when it's gone, it isn’t. Cancer owns your life for weeks, months or years, and when you get it back it won't be in the same shape you left it.

For many people that’s because they have lasting physical or mental damage, caused either by the disease itself or the treatment. For others, it’s the difficulty of readjusting to a life that isn’t focused around the simple facts of treatment. When your attention has been so exclusively on the here and now, the future can take you by surprise. One survivor described the feeling as cancer having paused their life. “I'm still waiting,” she said, “for someone to press play.”

Ghoulish as it may seem cancer treatment instills routine and a sense of purpose. My visits several times a week to the cancer clinic were important appointments to be kept, sparing me the self-pity that can come with days at a stretch in bed.

Those visits also gave me a personal connection to many of the medical staff. I wouldn’t be naïve enough to call them friends – they were doing a job, and doing it damn well – but the staff were great allies and a support network. Just as they got to know my story, I got to know theirs. I found out about their background, their children, their world view and the daily dramas of their lives. To absent myself from that was akin to suddenly departing a particularly sociable workplace.

Were I to return to my pre-cancer routines, of office work during the day, evenings relaxing on the couch and bike rides on the weekend, I suspect I would be at risk of daily life feeling inconsequential given the existential threat I recently felt. It would be hard to feel some emotional engagement with those activities when the suspicion that none of it really matters would have lurked in my mind.

But my circumstances are a bit different. In the two months before I was given the all-clear my first daughter was born. Having the end of my time as a cancer patient overlap with the start of my time as a father means I have been spared any sense of returning to my previous rhythm. The sense of great meaning I attached to my days during treatment has merely continued in another form, merely shifting from a mood of sorrow to one of bliss.

Eventually both the cancer and the early months of fatherhood will recede into the distance and I will perhaps be susceptible to the difficulties of returning to life as normal. For now, though, I’m in the throes of another big life event and am happy to stave off that mortal enemy, mundanity.

Every time I am back in the cancer clinic I am sure to drop in to visit the cancer nurses who are now devoted to saving other people in the position I was in until recently. A few weeks back my wife and I took my daughter in so we could introduce her to the staff. Over the six months of my treatment they had regularly seen my wife as the pregnancy advanced, but just a few weeks before the baby arrived my need to visit the cancer clinic ended.

As we wandered around the clinic with the baby in a pram we were greeted with great enthusiasm. In a hospital ward where the foreboding sense of death lingers heavy in the air, we were instead bringing in new life.

The baby they held and cooed and pinched was perhaps the best manifestation of just why we all battle on when nature tests us. 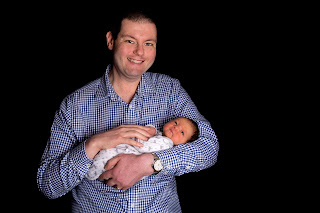 
This information is impressive; I am inspired with your post writing style & how continuously you describe this topic. After reading your post, thanks for taking the time to discuss this, I feel happy about it and I love learning more about this topic.

Unknown said…
I can only express a word of thanks. Because with the content on this blog I can add knowledge I, thank has been sharing this information. Do not forget to visit our website to share information and knowledge about health.|
obat pururigo pada anak |
obat kejang demam pada anak |
Cara Menghilangkan Cacar Air |
27 November 2018 at 14:46