Cars are the physical embodiment of the city’s anti-social aggression; their presence, with their noise and pollution and hint of danger has a chilling effect on people who traverse the city on foot. Trying walking shoulder to shoulder with a chain of Avanzas and Xenias and Kijangs to understand why.

But on car-free day, those vehicles are pushed aside. What emerges is impressive. 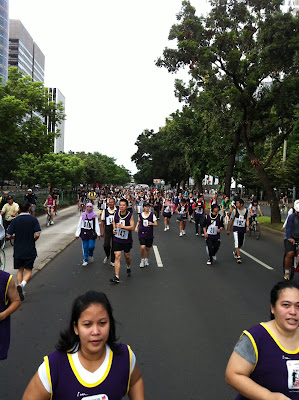 Wandering the street on car-free day in late January, there were a steady stream of families strolling down the six-lane expanse, well-dressed parents de-stressing from their office drudgery while young children darted about unpredictably. Alongside them were hipsters who had embraced the retro appeal of “fixie” fixed-gear bicycles, simple and elegant machines that do away with every non-essential part of a bike, brakes included.

A group of cyclists with a keen interest in historic old bikes gathered in matching T-shirts to chat, ride, and admire each other’s facial hair. A group of Star Wars enthusiasts donned home-made costumes of their favourite characters, wielding light sabres in playful jousts. 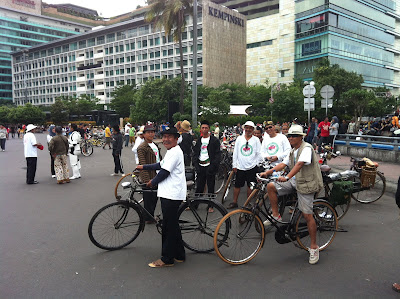 A little further up the road was the “Drive Books, Not Cars” fair. The community fundraiser spends weeks gathering second-hard books, both in English and Bahasa Indonesia, and then sells them on picnic rugs and trestle tables just off the street. In the midst of a classic phase, I picked up a copy of Dostoyevsky’s “Crime and Punishment” and a well-thumbed copy of Melville’s “Moby-Dick”.

A group of hippies claimed a stretch of open space to conduct demonstrate their fire eating, their meal punctuated with some playful slapstick in the proud tradition of street theatre. Middle-class families look on appreciatively, and the hat being passed around swiftly filled with 2,000 and 5,000 rupiah notes.

To understand the significance of such subversive activity, you need to appreciate the power that the street holds in the functioning of the city. Jalan Thamrin, as it is known in its northern stretch, and Jalan Sudirman, as it becomes further south, is a main artery of the thriving metropolis. Its four lanes of traffic in either direction are bumper-to-bumper at most hours of the day, and only a recently-established exclusive bus lane hosts vehicles that move through smoothly.

It acts as a microcosm for the city’s class divisions: its wealthy elite ride in cars (almost always as passengers rather than drivers), the middle-class weave in and out of the cars on ojek motorcycles, while the poor are on foot on the sidelines, begging, busking or vending whatever they can find.

The boulevard passes through the Hotel Indonesia traffic circle, an enormous water fountain next to the city’s first international hotel that has become a gathering point for youth whiling away the hours. In the middle of the pond stands the socialist-realist Welcome Statue, a young boy and girl (known to some as Hansel and Gretel) striving forward with unseemly vigour and enthusiasm.

A little further south stands the dignified statue of General Sudirman, the Indonesian military hero who commanded forces against the Dutch colonials during the battle for independence in the 1940s. The figure of the fighter, who died aged just 34, stares down, appearing to be in awe of the bustling parade before him. Continue to the southern end of the street and you reach another statue, officially the Youth Monument Statue but better known as Flaming Pizza Man because of its pose, which completely lacks Sudirman’s dignity.

The street has also borne witness to some of the city’s dark chapters. In the heady days of 1998, military snipers positioned themselves on building around the Semanggi cloverleaf, created by the elaborate intersection with Jalan Gatot Subroto. As student protests grew restive, police and soldiers fired into the crowd, killing a dozen people and staining the street with blood.

Come Sundays, through, the signs of state power are far more benign. Members of the city’s Inline Skate Police squad roll through the streets on their sleek footwear, looking about as threatening as a miniature schnauzer. 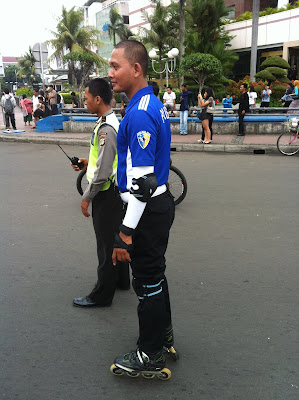 Officers in training even use the car-free space as an opportunity to practice their marching, with units trundling down the street in near-perfect formation to the chant of “kiri… kiri… kiri, kanan, kiri…”. Young’uns race up to march beside them for a stretch, while people flock to take photos of the scene. 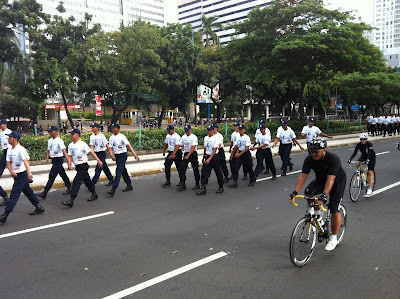 Cars act as a metaphor for the city as a whole. In many ways the city is an aggressive one, with corruption, incompetence and crassness matching the mood of its streets. So dominant in that mind-set that it is difficult for anyone to cope without yielding to it, no matter how honest or compassionate they might be.

For a morning a fortnight, we can take the cars off the streets and see community and creativity and healthy vitality arise. It’s hard not to wonder whether the same values might thrive if only we could do the same thing to the city as a whole – an arsehole-free day, perhaps – and see what emerges.
Indonesia