The joys of new life

May 19, 2016
As I sit writing this post my soundscape is filled with the contented murmurings of my daughter as she sleeps in the bassinet beside my bed. During a point in each sleep cycle she becomes quite animated, her breathing quick and irregular, her little palms flailing in front of her face and her lips letting out wordless utterances of agony or ecstasy. Such is the way with the dreams of a newborn child, where the realness of the experience manifests itself in the physiology of the dreamer.


Just what a newborn dreams about is hard to imagine - perhaps a pleasant dream about the cosiness of the womb or a nightmare about her sudden exit from it.

My daughter Amelia entered the world just two weeks ago. Every moment since then has been one of bliss for my wife Melanie and I, even the moments when Amelia's contented murmurings metamorphosise into pained screams from deep in her lungs.

As parents of a newborn we can quite happily while away the hours with Amelia, cuddling up and talking to her when she is awake and watching and listening to her as she sleeps. At first the appreciation centres on her physical cuteness - the dainty feet, the elaborately formed ear, the smooth crevices of her neck. All are a sensory delight that look so delicate, smell so fresh and are so soft that your fingertips barely detect that they've made contact.

But then the appreciation moves to the things she does. If she's in the right mood she can beguile us by making eye contact and staring deep into our souls - or so it seems. She can signal her desire for a feed not just with a throaty cry but with pleading eyes and an outstretched tongue. She can perform multiple bodily functions in perfect synchronicity and seemingly minimal effort. She can appear completely unconcerned as her whole body shudders in the throes of hiccoughs. Perhaps most satisfying for me is to watch her grapple with mild distress by taking in her surroundings and adjusting herself to achieve physical and psychological comfort on her own, rather than pushing the infant panic button.

Yes, I know, all these things have been going on with newborns since the dawn of time and are of no great interest to people other than a child's parents. The seen-it-all-a-thousand-times-before malaise of some of the midwives we've encountered is hard to miss. But we are her parents and so can't help but be captivated and intrigued by them.

Perhaps a small part of my fascination with the minutiae of my daughter's existence comes from the small but real possibility that I wasn't around to enjoy it. Before she'd reached the end of her first trimester in the womb I was diagnosed with my lymphoma and told I would need to undertake a battering of chemotherapy to maximise my chances of survival. The tumour in my chest was putting pressure on a heart valve, and my doctor later told me that it would have killed me within a week if we didn't start treatment when we did.

During the long months when my energy was sapped by the cell-killing drugs of my R-EPOCH cocktail I yearned for the day when it was all over. Sure, there was the relief from the physical symptoms, but most importantly, I wanted to know that I was one of the lucky ones who could tell stories of survival rather than a poor soul unable to escape cancer's deathly grip.

In the depths of my treatment I dreamed of the life I would have if only I could be among the survivors. Top of the list of things I desperately wanted to do was the cradle my newborn daughter in my arms and tell her everything is okay, knowing it was the truth.

It is a cliché of confronting hardship, medical or otherwise, that your children give you a reason to battle on. In truth I was pretty determined to battle on regardless. But the looming arrival of my daughter meant that my survival was not just something I desired so that I could continue to enjoy my life, but was now an obligation I had to another person in order to ensure she had her father in her life. To have succumbed to the disease would have denied my daughter something very precious.

Of course there is still the very real prospect that my health troubles will return and I will once again have to confront the prospect of denying my daughter an active father in her life. For now, though, things are looking pretty rosy and I can marvel at the wondrous things my daughter does, even if every other person in the history of humanity has done something similar.

Such simple pleasures, I am rapidly discovering, are the hallmarks of parenthood. 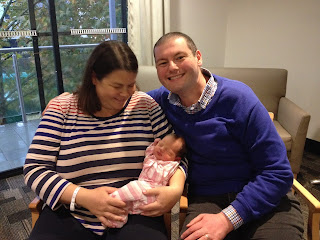 Sasha Buntman said…
Thanks for sharing, Ari. This brought a tear to my eye. What you describe is something all parents have the pleasure of experiencing and I am so happy you are enjoying these early days.
19 May 2016 at 15:52

Zihan Amelia said…
Subhanallah, this is a very good article. Give me awareness. Because all this time I always had a lot of good intentions, but after I got the things I could share.