Nope, I didn't realise it existed either, but apparently today is the 16th time it has been held.

I found out about the day thanks to a wonderful group of activists I met this afternoon gathered at Bundaran HI, Jakarta's largest roundabout. 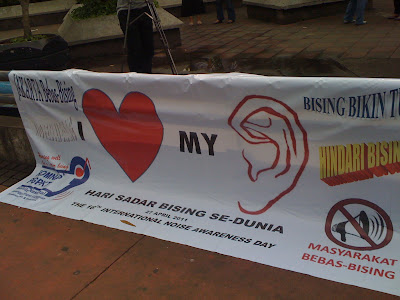 If any city needed to think about the noise at which it functioned, it would be Jakarta. Day and night, the city is filled with people, animals and machines generating a cacophony of sounds that make it hard to hear even the most blatant of personal bodily eruptions.

Take our place. Even indoors, and some distance from the street, we hear the imam from the local mosque preaching to the heathens through a megaphone; we hear the announcer at the train station booming at commuters with incomprehensible messages; and we hear the constant growl of cars, bikes and buses, many of which seem to have been built during a strike by the muffler-makers union.

Go a little closer to the street and you can add the sales pitch of the warung and kaki lima food stalls, the music pumped out at the larger shops, the animals at the market, the equipment on construction sites and all manner of other sounds.

Some of the noise is unavoidable, but there is plenty that could be controlled - if the will was there. Drivers beep their horns far more frequently than is necessary, often just as a look-at-me statement to no-one in particular. Many shops draw attention to themselves by pumping out music at a volume that strains the speakers. And train stations (there's one near us, making me acutely aware of it) broadcast their indecipherable message at a thunderous volume.

It's as if there's "sound inflation" at work, where each raises their volume to be heard over the other. Go soft, and you won't be heard.

Enough! So say Masyarakat Bebas-bising (Noise-free Community), the small but determined group behind the Jakarta gathering.

They are running a campaign calling for the city to have two hours a day at volumes of less than 90 decibels, and seven hours a day of no more than 70 decibels.

While I have no tool for measuring volume here, by this chart I would be surprised if the main streets of Jakarta had sustained periods below 95 decibels during daylight hours.

The campaign, carrying the slogan "sayangi telingamu... sayangi masa depanmu" ("love your ears... care about your future"), points to the many sources of excessive noise: traffic, music, heavy industry and terror attacks. Can't argue with that.

Good luck to them in their campaign, but I don't like their chances. Noisiness seems to be ingrained in the psyche of Jakartans, perceived as a natural way of functioning. Unlike in other cities, there's no shame attached to being a generator of loud noise, or any sense that your noise might be causing inconvenience for others. To change the noise levels, you need to change the mindset of the noise makers.

A tough task, but a noble one. Jakarta would be a finer place if it was a little quieter.
Indonesia