May 16, 2011
Last week I spent a couple of days in Kuala Lumpur, taking in the fantastic sites and smells of a city that's small enough to function smoothly and large enough to keep a curious tourist amused, for a few days at least. 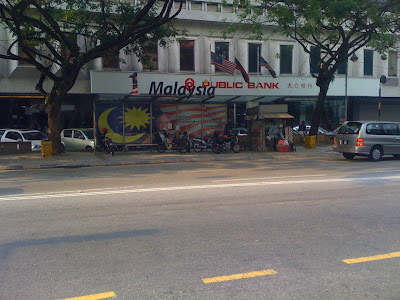 Not content with plying people with images of multicultural children smiling as if they miss out on dinner if they don't, the campaign uses the distant stare of Malaysia's prime minister, Najib Razak, to ram home both its message and his election prospects.

What makes this particular propaganda effort so cloying is the vast chasm between it and reality. Malaysia is a country built upon racial division, divvying up entitlements based on race. In an supposed effort to help them overcome previous disadvantage, Malays are given access to opportunities denied their Chinese and Indian countryfolk.

In Kuala Lumpur, at least, the three groups seem to live very separate lives, residing in their own neighbourhoods and socialising among their own. Not surprising, perhaps, but what is disturbing is the extent to which these divisions are fostered by the state.

It has a long histry. The driving force in Malaysian politics since before the country's independence in 1957 is UMNO, the United Malays National Organisation, and it remains dominant today.

While notionally the ruling party is Barisan Nasional, comprised of a variety of political organisations (including those representing Chinese and Indian interests), it is UMNO that dominates its operations, holding a monopoly on its leadership.

So in this context, it is hard to take a campaign promoting the benefits of racial harmony seriously. Fine sentiments, certainly, but they fly in the face of reality and, frankly, insult the intelligence of anyone who is exposed to it.

In the words of Shakespeare's Queen in Hamlet, "The lady doth protest too much, methinks." 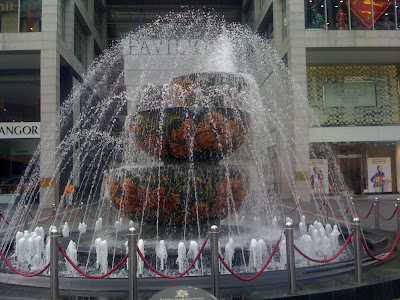 Sadly, even fine things such as the crystal fountain outside The Pavilion shopping centre not exempt. 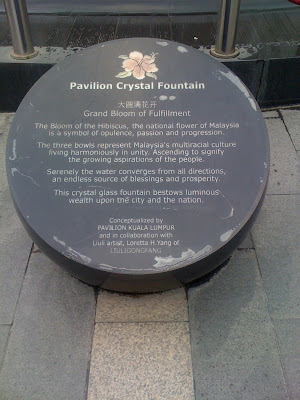 November 30, 2004
Lazing back at the hostel planning on my next big adventure, I came across this on the notice board (read the whole thing here): VISITING BANGKWANG, KLONG PREM and other prisons It is usually possible to go and visit a prisoner without prior notice. These visits allow the visitor to have a conversation with only a fence, ( or two fences as at Bangkwang ) between yourself the prisoner. Message boards around Bangkok invite the casual traveler to visit anytime. SCHEDULES : Bangkwang Klong Prem Lard Yao Women's Prison This was an experience too exciting to pass up. There are so many layers to this encounter, I think I should start off by just explaining what I saw: Dutifully, I followed the straight foward instructions that lead me to the river, on a 30 minute river express boat ride up to the poverty-riddled northern part of Bangkok, and then for a brief walk to the prison grounds. The visitors centre is a chaotic open-air courtyard, with surly bureaucrats and yo
Read more