June 17, 2011
So Abu Bakar Bashir will serve 15 years for terror - if the verdict can survive the appeals process, which has not been the case following past convictions.

I suspect the verdict will bring some relief to victims of terror attacks that Bashir has previously been associated with,including the carnage of Bali in 2002, even if that connection may not have been provable nor criminal under the laws in place at the time.

It will also send a wave of relief through the Indonesian government, for whom the inability to obtain a terror conviction against Bashir was a source of embarrassment, given his notoriety.

Keen to see things first-hand, I headed down to the South Jakarta District Court complex yesterday to watch the verdict unfold. There was no shortage of company, with about 1000 Bashir supporters from Jamaah Ansharut Tauhid watched over by several hundred members of the Jakarta police and a strong contingent of journalists.

The Bashir supporters were certainly vocal, but at no time did it look like tempers would boil over. The police, however, were prepared in case they did - the firearms, riot shields and tank were hard to miss.

As is traditional with Indonesian trials, coming to the verdict itself was a painfully slow affair. Despite the determination already having been made, the judges read aloud a meticulous account of the evidence against Bashir before announcing the verdict, uniting all those outside in a strong view that whatever the decision, the judges should just get on with it.

There is plenty being written today about the implications of the verdict, and at this stage I have little to add. But I thought it was worthwhile to publish some of the photos I took yesterday in an event that amounted to a strange carnival of justice. 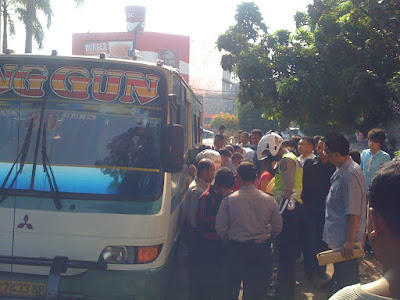 Police were strict in checking trucks and buses heading towards the courthouse. Even though it was more than 10 kilometres away, all the commuters on this Kopaja were forced by police to step off and be checked for weapons. 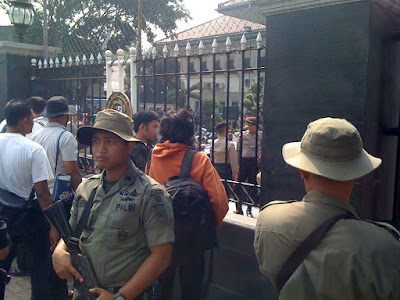 At the courthouse, members of JAT were thronged alongside heavily armed police. 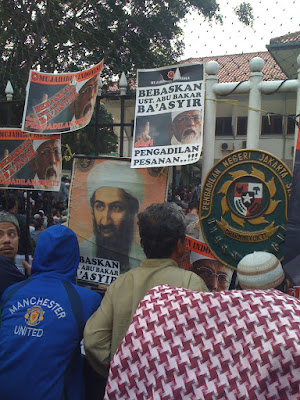 Bashir is considered by many as Indonesia's bin Laden. 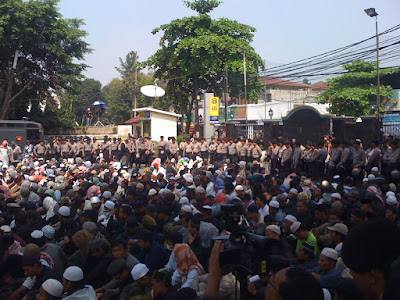 The heat during the day sapped the energy of many who had gathered. 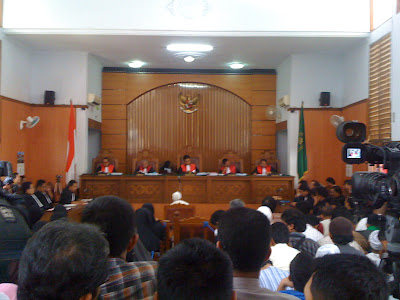 In court, Bashir sat in front of the judges, with several dozen supporters crammed in behind him. 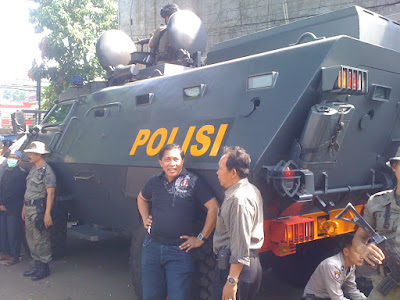 This tank did not need to be used - its mere presence was a strong enough signal to Bashir's supporters. 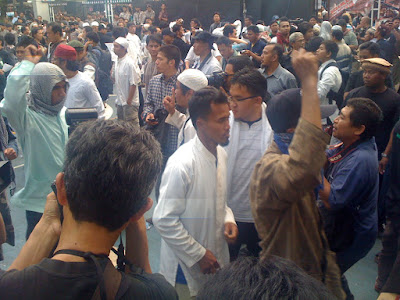 After the verdict, many of Bashir's supporters jogged in circles around the courtyard in a mock training drill, in an apparent nod to the paramilitary training camp Bashir was accused of funding in Aceh.
Indonesia