June 24, 2011
In the part of the world where I'm from, badminton is more likely the answer to a trivia question than a sport people would play or watch. To many Australians, there's something just a bit twee and silly about the sport, especially when compared to the fast pace of tennis. But there are some parts of the world where badminton is all the rage: Denmark, Taiwan, and, yes, Indonesia.

This week is the Indonesia Open, one of the five premier events on the global badminton circuit. And so I ventured to the Istora indoor sports venue, which sits in the shadows of the Gelora Bung Karno stadium that was the site of my Persija Jakarta experience last Sunday.

I went along on Wednesday, the opening day of the main competition - and really enjoyed it.

The element I had previously dismissed as a weakness of the sport - the unusual movement of the shuttlecock through the air - is in fact its great strength. You see, no matter how hard you strike a shuttlecock, and it has apparently been clocked at 320 km/h, by the time it reaches your opponent's side of the net it has slowed dramatically due to the drag of the feathers on the shuttle. So speed and strength alone win you very few badminton points.

Instead, you need to get creative, moving your opponent around the court, pushing them to one side then the other, into the net and to the baseline. Points are miniature psychological battles rather than competitions of brute force.

The unusual aerodynamics of the shuttlecock also mean that even when one player appears dominant during the progress of a point, there's always an opportunity for their opponent to fight back. Where a smash would usually be the end of the matter in a tennis point, the same is not the case in badminton.

Throw in the excitement of a rather adolescent Indonesian crowd cheering on their compatriots and the carnival atmosphere that surrounds any big international sporting event, and it's hard not to have a fun day out. With the tournament running until Sunday, I might just make a return visit. 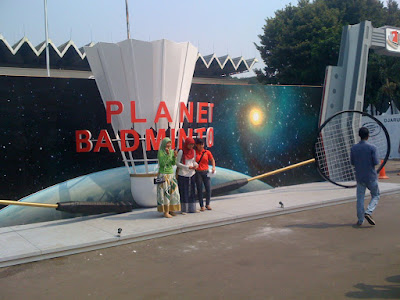 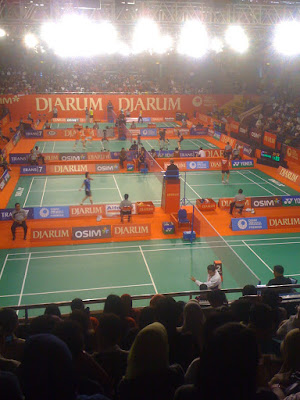 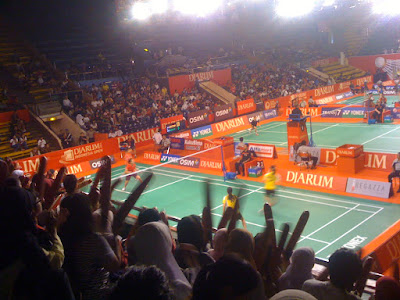 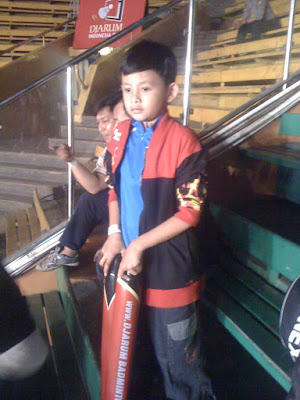 Tobacco maker Djarum doing all it can to get 'em while they're young.
Indonesia

Jakartass said…
Having been county standard at uni. in the UK, badminton was one of reasons I was attracted to Indonesia in the first place.

I was used to playing in sports centres and/or school halls in evening 'classes', so I looked forward to continuing to get my exercise in a fun and thinking way - badminton is gladiatorial, the essence of all sport.

A search for 'badminton' on Jakartass gives 17 mentions, most in the context of the dearth of public sports facilities and the general lack of interest from the media.

For example, when Taufik Hidayat won gold at the 2004 Olymics and dedicated it to everyone watching him back home, we weren't because not one channel had paid for the TV rights to the Olympics. (TVRI had a couple of talking heads, but no live coverage.)

And isn't it somewhat perverse that a major cigarette company, Djarum, should sponsor the sport?
29 June 2011 at 14:22

November 30, 2004
Lazing back at the hostel planning on my next big adventure, I came across this on the notice board (read the whole thing here): VISITING BANGKWANG, KLONG PREM and other prisons It is usually possible to go and visit a prisoner without prior notice. These visits allow the visitor to have a conversation with only a fence, ( or two fences as at Bangkwang ) between yourself the prisoner. Message boards around Bangkok invite the casual traveler to visit anytime. SCHEDULES : Bangkwang Klong Prem Lard Yao Women's Prison This was an experience too exciting to pass up. There are so many layers to this encounter, I think I should start off by just explaining what I saw: Dutifully, I followed the straight foward instructions that lead me to the river, on a 30 minute river express boat ride up to the poverty-riddled northern part of Bangkok, and then for a brief walk to the prison grounds. The visitors centre is a chaotic open-air courtyard, with surly bureaucrats and yo
Read more