April 25, 2011
I've just returned from the ANZAC Day dawn service in the inner city Jakarta suburb of Menteng Pulo. The venue was the Jakarta War Cemetry, a little oasis of quiet amid towering residential blocks and the sights and smells of kampung life.

While Australians and New Zealanders represented the bulk of the several hundred people in attendance, there was also a generous contingent of Indonesian veterans and soldiers, diplomats and civilians from several other nations.

Like most ANZAC Day service, it was a simple affair that prompted those in attendence to think about themselves and their circumstances. Its power derives from its quiet understatement.

The cemetery for Commonwealth soldiers is a remarkable place, with nearly a thousand soldiers buried in minimally marked graves amid immaculately maintained lawns. Among those whose final resting place is here are 96 Australians.

Jakarta War Cemetery therefore contains the graves of many who died in defence of Java and Sumatra during the swift Japanese advance in 1942 and many others who perished afterwards as prisoners of war.

The humidity of Jakarta, even before the break of dawn, meant that the service was a far warmer experience than is ever likely in Australia. And where Australians at home tend to dress to keep warm - those not in uniform, that is - the Jakarta ceremony was one that called for a degree of formality.

It was humidity - yep, let's blame that - that prompted many to seek an amber ale, which they were doing in great number at the official gunfire breakfast at one of the city's swank residential apartments.

An ANZAC Day to remember. 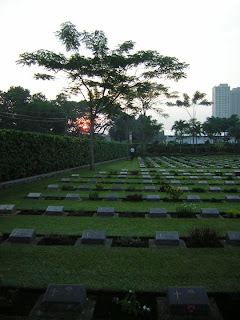 Anonymous said…
What an experience. A very sombre mood, makes you think about the different wars that Aussies have participated and lost their lives.
Aunty
26 April 2011 at 19:38